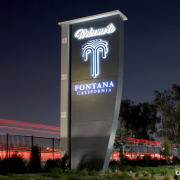 Last week, we began our project narration for the giant monument sign in Fontana, CA. Are you curious to see what came from digging a 19-foot deep hole, planning a design around a 60-foot center pole, and putting up a structure that withstands 130 miles per hour? Stick around and buckle up! 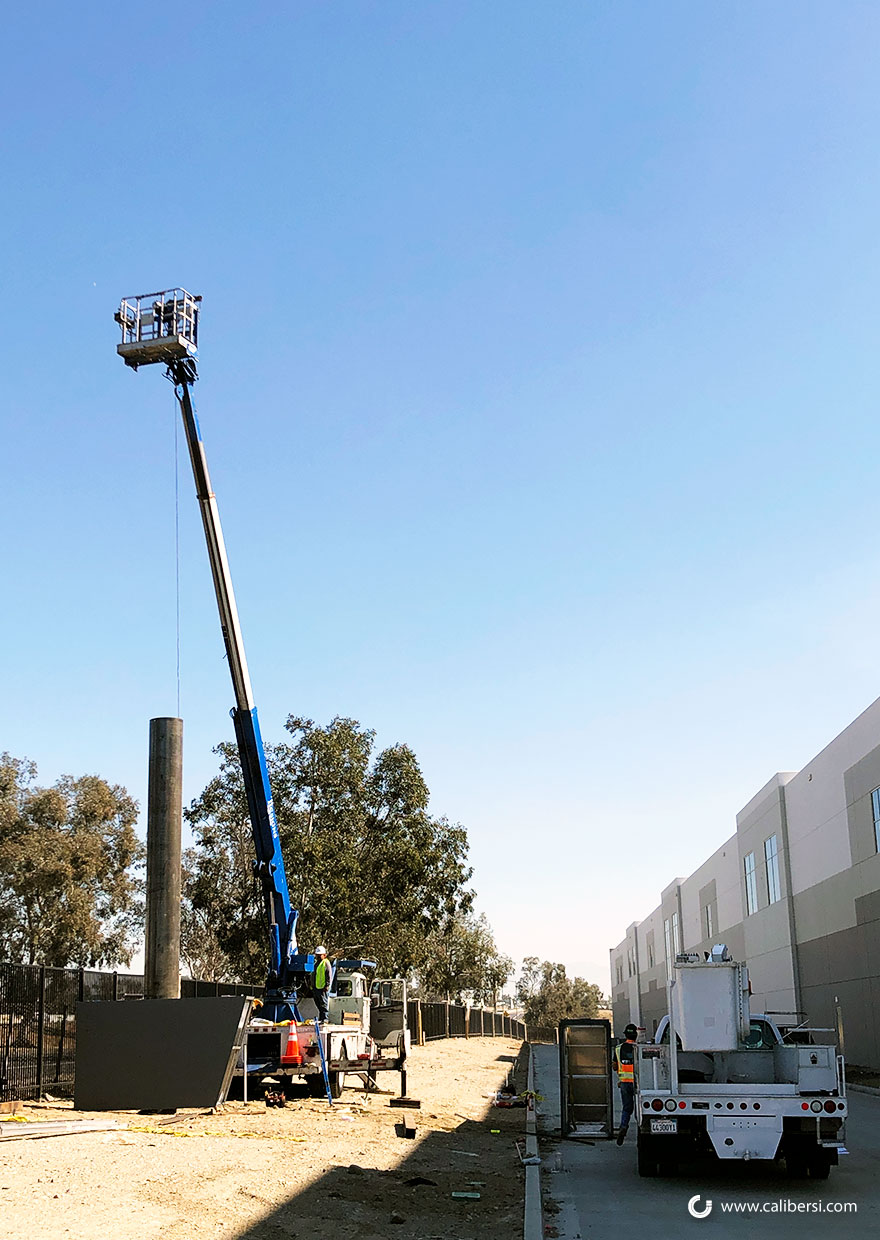 We left you at the yawning crater we dug into the ground. There would be 19 feet of pole, which was 24-inches in diameter placed underground to anchor the structure in place. We planned to secure it with concrete. However, before doing so, the permitting process required us to call in the city for a pre-inspection. 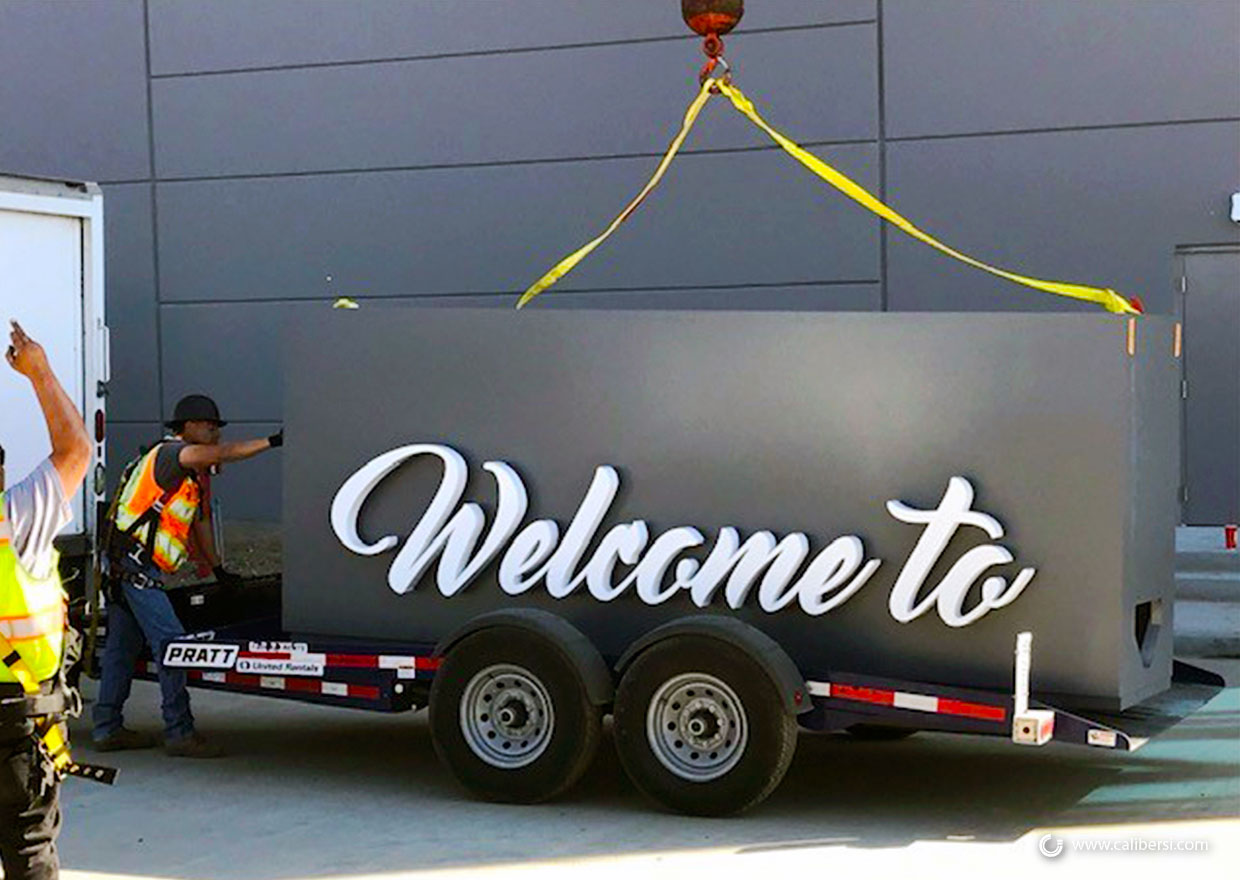 The city inspector joined us on-site as we were readying the concrete. There are good reasons for doing so. For starters, the inspector verifies that the hole size and pipe measurements are indeed as we specified them in the written permit. Moreover, they want to ensure that both are structurally sound before covering everything with concrete. 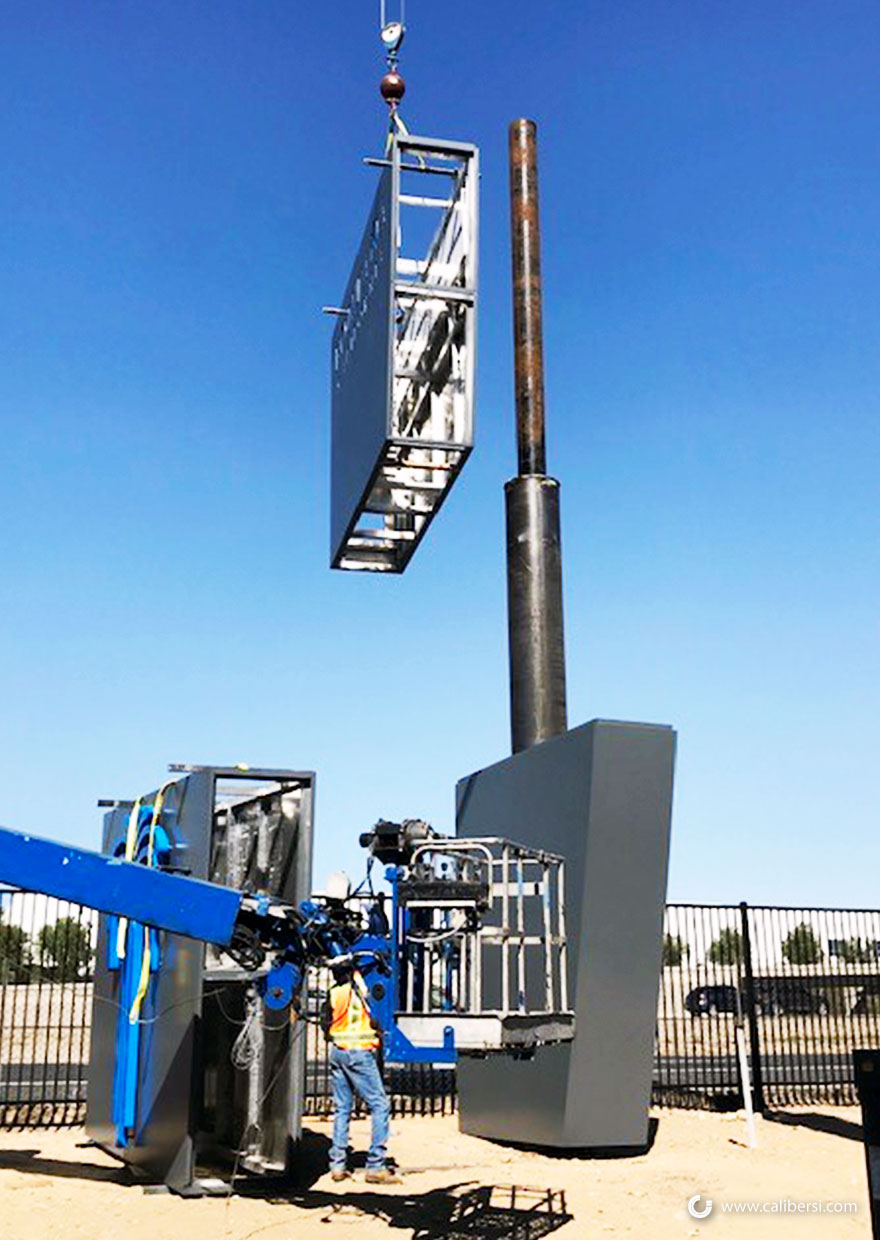 Putting Together a Very Tall Monument Sign in Fontana, CA 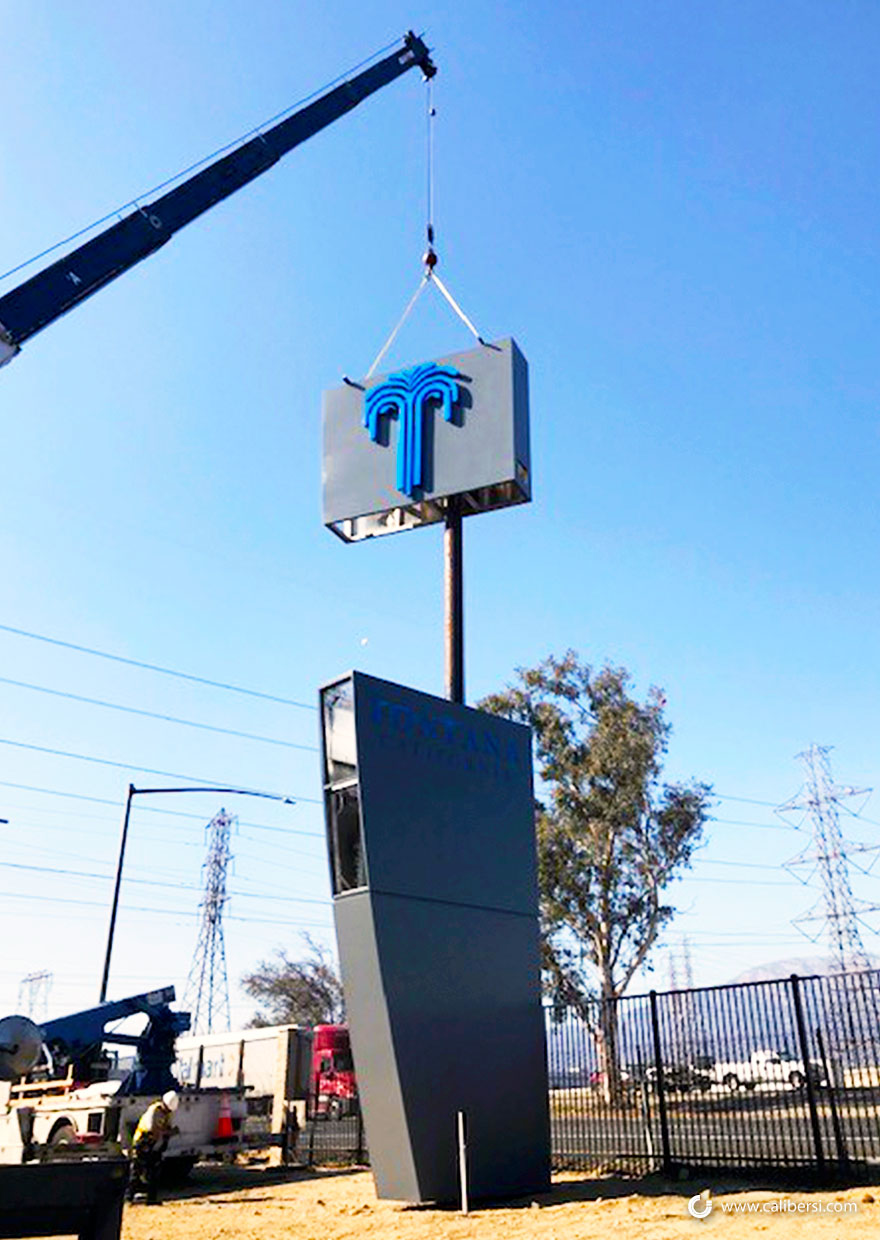 With the pipe in place and the inspector’s approval, our team poured the concrete that would create a secure footing for the 40-foot sign. It took two large cement trucks to provide the volume of concrete we needed to fill the hole. Now, we had to wait for several days to let the substance set, harden, and cure. 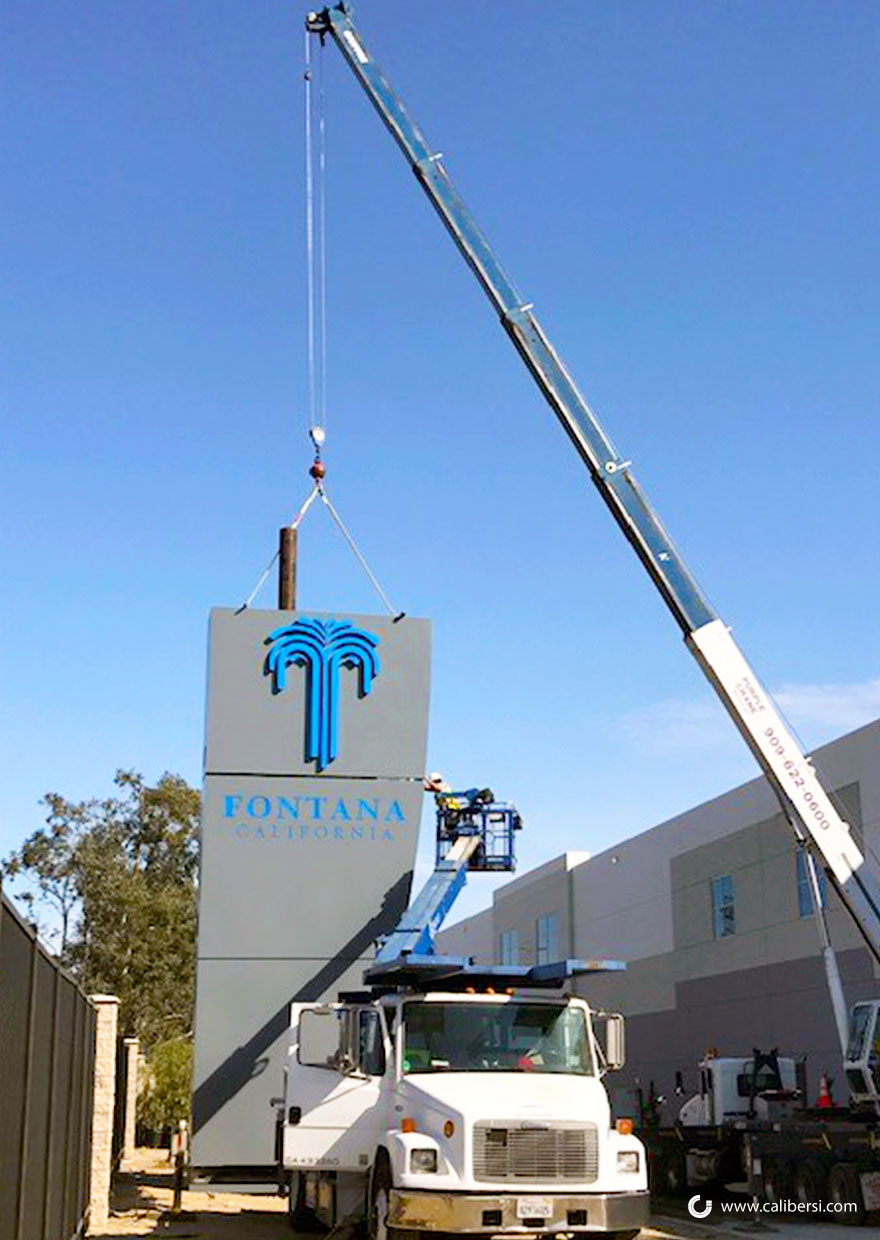 Once we were confident that it was good to continue, we brought the five monument sections by truck to the site. After several trips, we had the pieces in place. Would they fit as perfectly on-site as they did on paper?

As we assembled the sign stage by stage, we continued to measure, check, and double-check the specs. Assembly was slow going but accurate. The top and bottom of the monument were secured to the pole using oversized bolts. This step was instrumental for the success of the project. 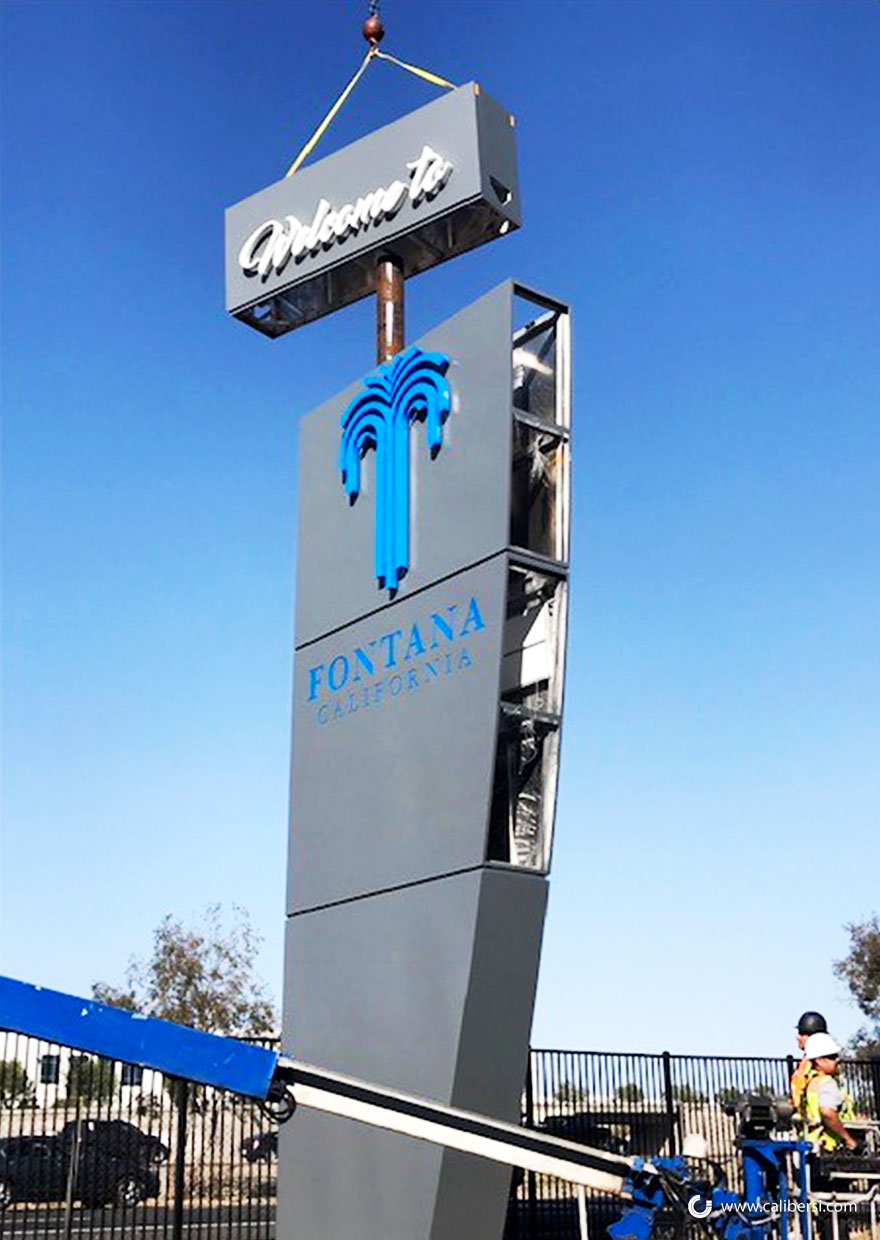 Look closely, and you will notice a hidden access door that allowed one of our team members to get in and out of the sign to finalize the assembly from the inside. Doing so minimizes the use of anchors that could be visible from the outside. Besides that, the door is instrumental for allowing a technician to enter the structure in the future to service the LEDs. 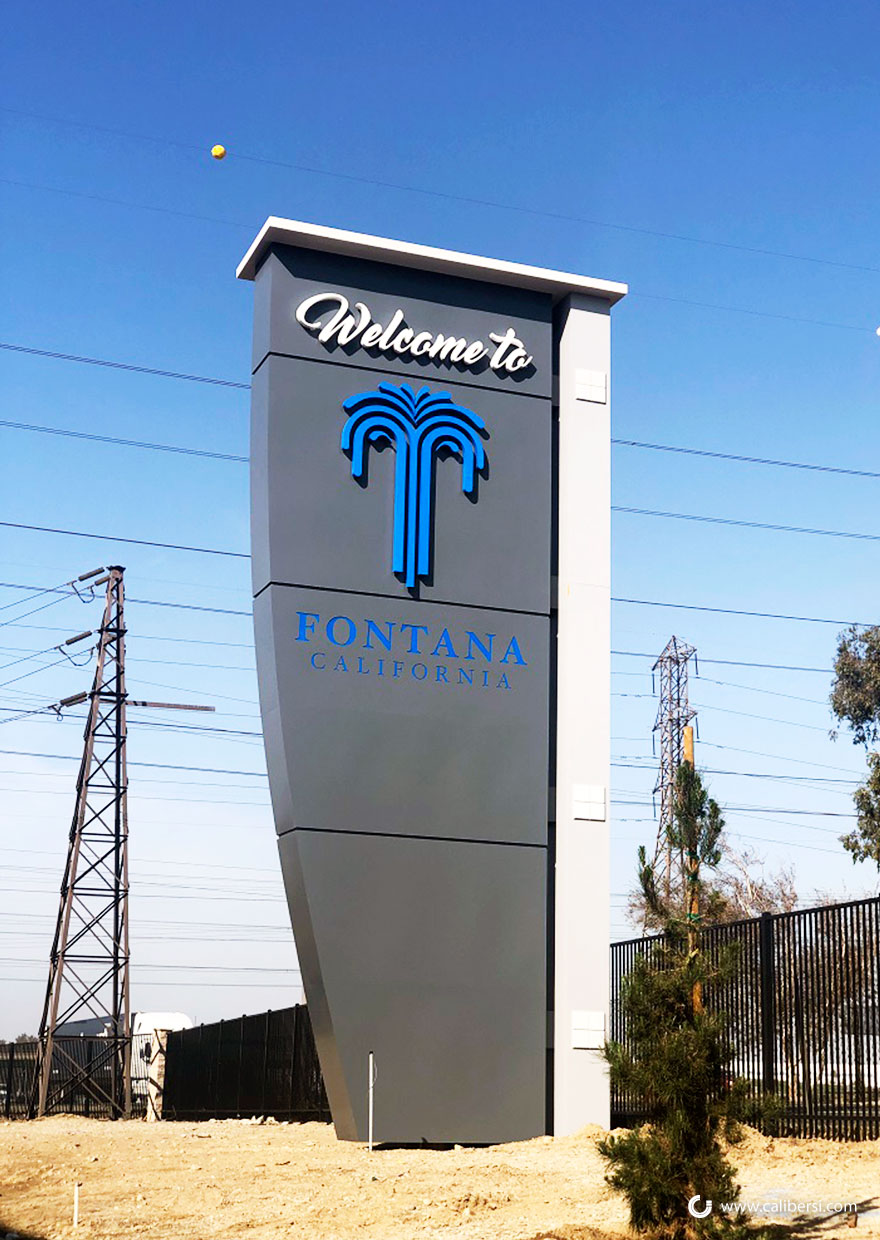 The shop placed the power supply and electrical controls at the sign’s base. This setup allows the electricity company to make the final connections to the property. Once this step was done, the sign was able to illuminate for the first time. 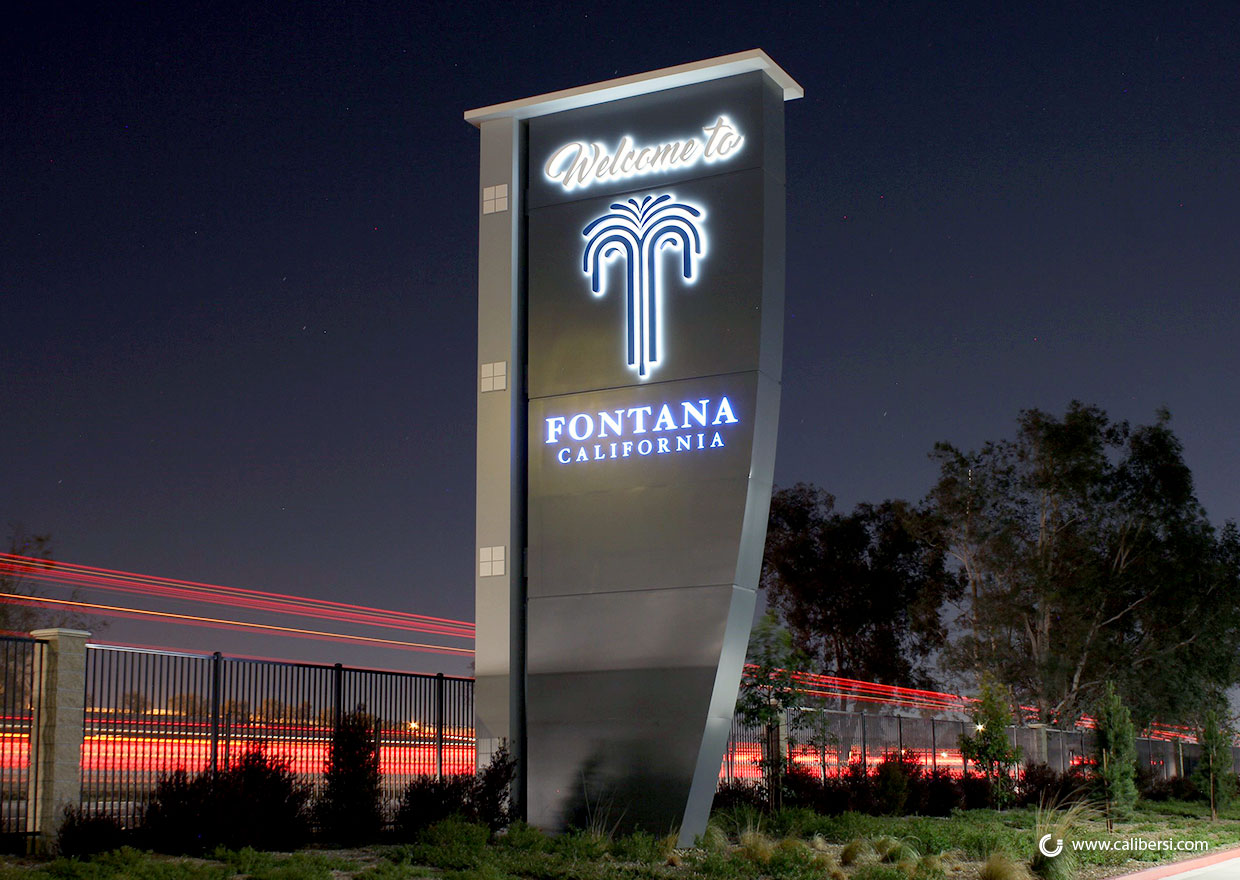 We decided on an astronomical timer control that allows for nighttime illumination while accounting for daylight time changes and California’s low-consumption electrical energy code.

This monument sign project exceeded our client’s expectations, which means that it met the Caliber mission to “wow one customer at a time!”